Heat of soil on depth to 20 m is saved-up solar heat which passes to soil thanks to direct heating by sunshine, heat transfer from air or the dropped-out atmospheric precipitation. Warmly deeper layers, is lower 20 m (so-called «a neutral zone»), are formed by the energy arriving from a subsoil of the earth, and practically does not depend on seasonal climate changes.

Thermal pumps with soil heat exchangers of direct expansion have higher efficiency in comparison with thermal pumps of soil type with brine use. This difference speaks that in systems to a rassolny contour there is a double heat exchange soil – a brine, a brine – a coolant, unlike heat exchange of systems of direct expansion «soil – a coolant». In systems with heat-carrier use as heat carrier, additional costs of ensuring operation of the circulating pump also are imposed. Soil rassolny a contour share on: vertical and horizontal. 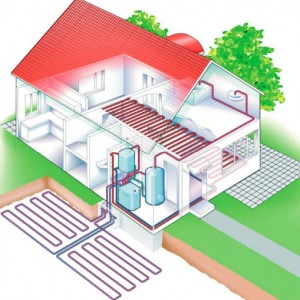 The soil thermal pump with a horizontal contour 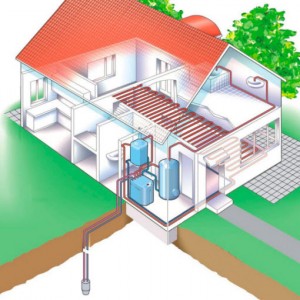 The thermal pump with a vertical contour (probe)

The useful quantity of heat and efficiency of the thermal pump, and thus the area of a necessary surface of heat exchange depend on heatphysical properties of soil and from climatic conditions of the region. Thermal properties of soil, such as a volume thermal capacity and heat conductivity, very strongly depend on granulometric structure and a condition. Heatheat-sink properties and heat conductivity of soil of subjects are higher, than more its humidity, a mineralization and than is less maintenance of a time in it with air. Therefore the soil thermal pumps identical on capacities and being in one climatic zone, can differ demanded quantity of soil contours and in their length.