Solar energy, radiation from the Sun capable of producing heat, causing chemical reactions, or generating electricity. The total amount of solar energy incident on Earth is vastly in excess of the world’s current and anticipated energy requirements. If suitably harnessed, this highly diffused source has the potential to satisfy all future energy needs. In the 21st century solar energy is expected to become increasingly attractive as a renewable energy source because of its inexhaustible supply and its nonpolluting character, in stark contrast to the finite fossil fuels coal, petroleum, and natural gas. 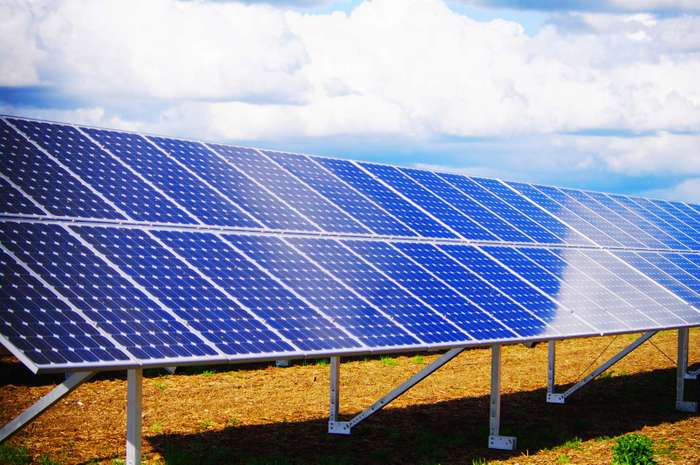 The Sun is an extremely powerful energy source, and sunlight is by far the largest source of energy received by Earth, but its intensity at Earth’s surface is actually quite low. This is essentially because of the enormous radial spreading of radiation from the distant Sun. A relatively minor additional loss is due to Earth’s atmosphere and clouds, which absorb or scatter as much as 54 percent of the incoming sunlight. The sunlight that reaches the ground consists of nearly 50 percent visible light, 45 percent infrared radiation, and smaller amounts of ultraviolet and other forms of electromagnetic radiation. 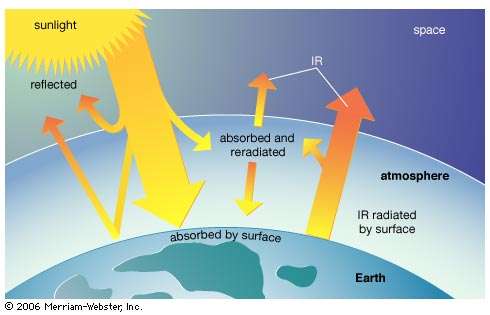 The potential for solar energy is enormous, since about 200,000 times the world’s total daily electric-generating capacity is received by Earth every day in the form of solar energy. Unfortunately, though solar energy itself is free, the high cost of its collection, conversion, and storage still limits its exploitation in many places. Solar radiation can be converted either into thermal energy (heat) or into electrical energy, though the former is easier to accomplish. 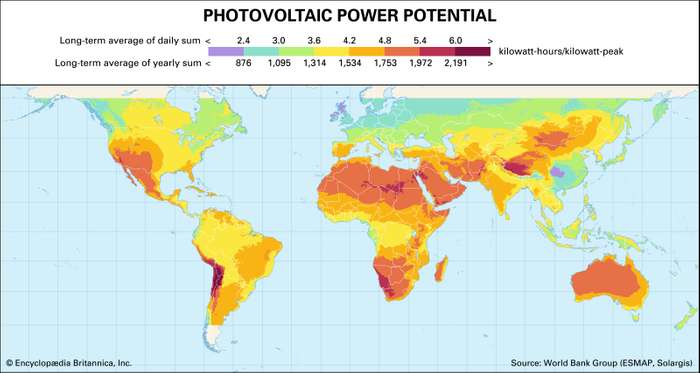 Thermal Energy
Among the most common devices used to capture solar energy and convert it to thermal energy are flat-plate collectors, which are used for solar heating applications. Because the intensity of solar radiation at Earth’s surface is so low, these collectors must be large in area. Even in sunny parts of the world’s temperate regions, for instance, a collector must have a surface area of about 40 square metres (430 square feet) to gather enough energy to serve the energy needs of one person.

The most widely used flat-plate collectors consist of a blackened metal plate, covered with one or two sheets of glass, that is heated by the sunlight falling on it. This heat is then transferred to air or water, called carrier fluids, that flow past the back of the plate. The heat may be used directly, or it may be transferred to another medium for storage. Flat-plate collectors are commonly used for solar water heaters and house heating. The storage of heat for use at night or on cloudy days is commonly accomplished by using insulated tanks to store the water heated during sunny periods. Such a system can supply a home with hot water drawn from the storage tank, or, with the warmed water flowing through tubes in floors and ceilings, it can provide space heating. Flat-plate collectors typically heat carrier fluids to temperatures ranging from 66 to 93 °C (150 to 200 °F). The efficiency of such collectors (i.e., the proportion of the energy received that they convert into usable energy) ranges from 20 to 80 percent, depending on the design of the collector. 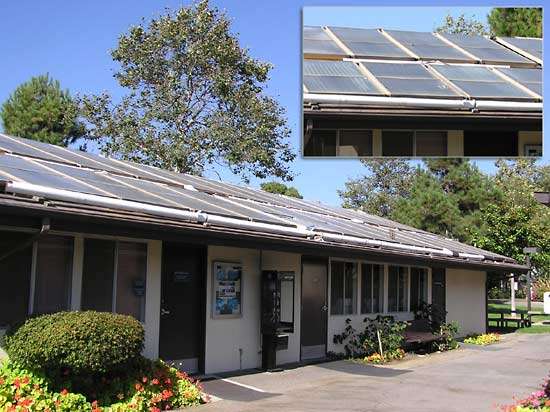 Another method of thermal energy conversion is found in solar ponds, which are bodies of salt water designed to collect and store solar energy. The heat extracted from such ponds enables the production of chemicals, food, textiles, and other industrial products and can also be used to warm greenhouses, swimming pools, and livestock buildings. Solar ponds are sometimes used to produce electricity through the use of the organic Rankine cycle engine, a relatively efficient and economical means of solar energy conversion, which is especially useful in remote locations. Solar ponds are fairly expensive to install and maintain and are generally limited to warm rural areas.

On a smaller scale, the Sun’s energy can also be harnessed to cook food in specially designed solar ovens. Solar ovens typically concentrate sunlight from over a wide area to a central point, where a black-surfaced vessel converts the sunlight into heat. The ovens are typically portable and require no other fuel inputs. 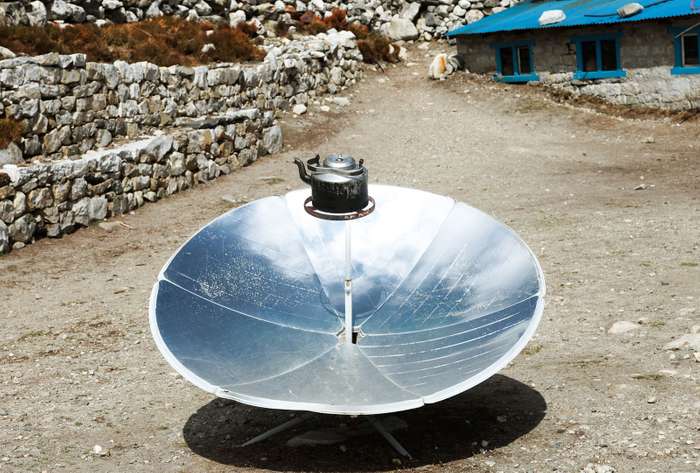 Electricity Generation
Solar radiation may be converted directly into electricity by solar cells (photovoltaic cells). In such cells, a small electric voltage is generated when light strikes the junction between a metal and a semiconductor (such as silicon) or the junction between two different semiconductors. (See photovoltaic effect.) The power generated by a single photovoltaic cell is typically only about two watts. By connecting large numbers of individual cells together, however, as in solar-panel arrays, hundreds or even thousands of kilowatts of electric power can be generated in a solar electric plant or in a large household array. The energy efficiency of most present-day photovoltaic cells is only about 15 to 20 percent, and, since the intensity of solar radiation is low to begin with, large and costly assemblies of such cells are required to produce even moderate amounts of power. 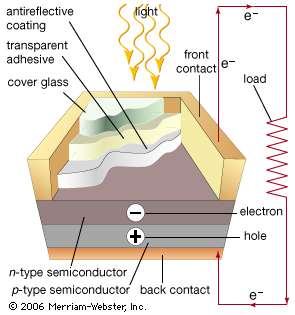 Small photovoltaic cells that operate on sunlight or artificial light have found major use in low-power applications—as power sources for calculators and watches, for example. Larger units have been used to provide power for water pumps and communications systems in remote areas and for weather and communications satellites. Classic crystalline silicon panels and emerging technologies using thin-film solar cells, including building-integrated photovoltaics, can be installed by homeowners and businesses on their rooftops to replace or augment the conventional electric supply. 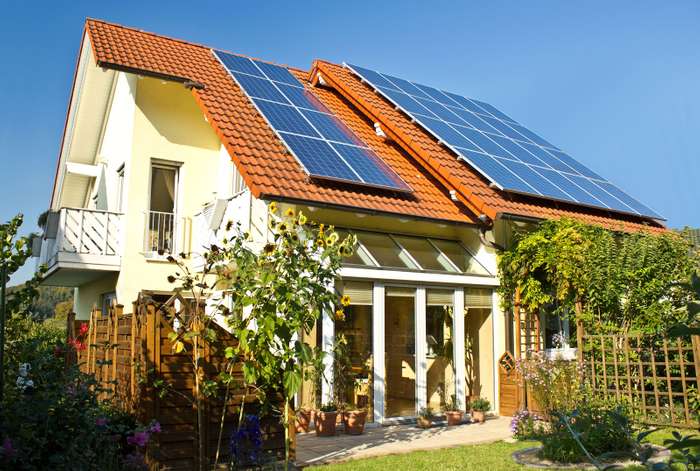 Concentrated solar power plants employ concentrating, or focusing, collectors to concentrate sunlight received from a wide area onto a small blackened receiver, thereby considerably increasing the light’s intensity in order to produce high temperatures. The arrays of carefully aligned mirrors or lenses can focus enough sunlight to heat a target to temperatures of 2,000 °C (3,600 °F) or more. This heat can then be used to operate a boiler, which in turn generates steam for a steam turbine electric generator power plant. For producing steam directly, the movable mirrors can be arranged so as to concentrate large amounts of solar radiation upon blackened pipes through which water is circulated and thereby heated. 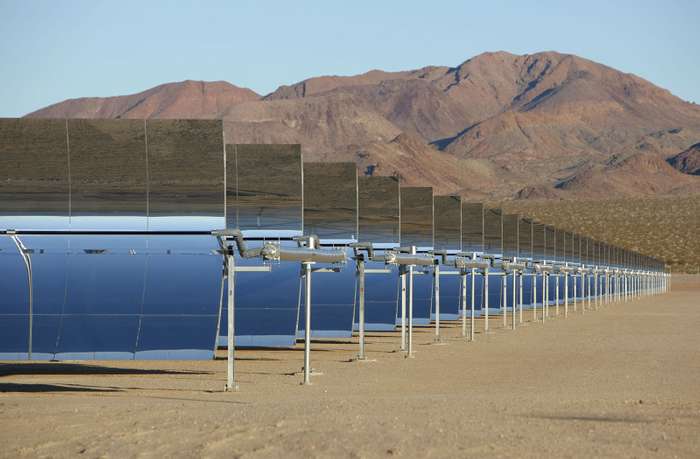 Other Applications
Solar energy is also used on a small scale for purposes other than those described above. In some countries, for instance, solar energy is used to produce salt from seawater by evaporation. Similarly, solar-powered desalination units transform salt water into drinking water by converting the Sun’s energy to heat, directly or indirectly, to drive the desalination process.

Solar technology has also emerged for the clean and renewable production of hydrogen as an alternative energy source. Mimicking the process of photosynthesis, artificial leaves are silicon-based devices that use solar energy to split water into hydrogen and oxygen, leaving virtually no pollutants. Further work is needed to improve the efficiency and cost-effectiveness of these devices for industrial use.